About MR. ED'S DRIVE IN

​It all started April 1, 1963, when Ed & Louise Garrison
opened Mr. Ed’s Drive In. They had a vision to
open a little place at the intersection of State Hwy NN &
Hwy 65 (the turn to newly built Lake Pomme de Terre)
and near Skyline High School (also new at the time)
located just a few miles north on Hwy 65. They served
mainly burgers, fries, & ice cream. Ed was well known
in the area for welcoming kids and supporting area
schools.
The Garrisons sold the restaurant to Galen &
Jeanne Lindsey in 1970. They ran Mr. Ed’s until 1975,
then, sold out to Charlie & Yvonne Combs. In 1977,
school teachers Don & Francis Brewer purchased Mr.
Ed’s and ran it as a seasonal restaurant, closing during
winter months. They ran Mr. Ed’s that way until the
spring of 1984.
On a trip home for Christmas in 1983 Jim & Becky
Reynolds (the current owners) contemplated the idea
of purchasing Mr. Ed’s. Becky was a local girl who
knew the potential of Mr. Ed’s. Jim being from Belton,
Missouri, was not convinced. After conversations with Kenneith Pitts (Becky’s dad), Bill Vaughan at the Bank of Urbana, and Ed Garrison himself, they decided to make the Brewers an offer. Mr. Ed’s was not actually for sale, so it took some talking, but Brewers decided to sell.
In April of 1984, the Reynolds took over Mr. Ed’s
with the intent to run it just like the original owners,
Ed & Louise Garrison: welcoming all ages, serving the best quality food at fair prices, and keeping it clean.
The most popular items on the menu these days
are cheeseburgers, fresh cut tenderloin sandwiches,
suzy q’s, and of course, the ice cream.
Jim & Becky love the community and appreciate
the customers they’ve gained over the years. People
from all over the country eat at Mr. Ed’s. Jim & Becky
have also employed many wonderful people. They’ve
raised their own kids at Mr. Ed’s and are now looking
forward to  their grandkids learning the business.
If you’re driving through Urbana, be sure to stop
in and help them celebrate over 50 years of drive-in
success. 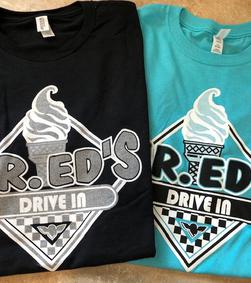 Mr. Ed's T-Shirts
$10.00 each
Available for purchase
in restaurant.